The Superbowl and the Boss 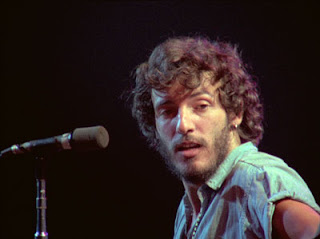 Recently I asked my friend Steve to breakdown Bruce Springsteen's possible setlist for the upcoming Superbowl. You see Steve is a huge Boss fan. I am not. So my Springsteen setlist for the Superbowl would have been, "Born in the USA," "Pink Cadillac," and "the one where he talks about Jersey." Since my last choice encompasses roughly 80% of his catalog, I decided to forgo a post and call in an expert. Here's Steve...

My good friends here at the Popcorn Trick have awakened me from my winter slumber with a challenge based upon this Sporting News blog post. What songs will Bruce Springsteen play during the Super Bowl halftime show? As a go-to Springsteen “expert,” I’m at least as qualified as Donovan McNabb is to lead a two-minute drill. But I am not devoid of Springsteen-cred either. So while you never really know what to expect from a Springsteen setlist, I’ll try to venture an educated guess.

First, let’s take a quick look at halftime shows since the return of the focused, single-act performances – basically the past four years. Post wardrobe-malfunction, if you will. We’ve had McCartney, the Stones, Prince, and Tom Petty each playing 3 or 4 songs over about 15 minutes. Macca went all classics, but he didn’t have a new album to push at the time – same thing with Petty last year. The Stones played their two biggest hits sandwiched around one new song from the album they were promoting in ‘05. Prince being, you know, Prince, went with a medley of his own hits and oddly chosen covers (CCR, Dylan, Foo Fighters) in what somehow came together as probably the best halftime show in recent memory.

So, that said, let’s say that Bruce has 15 minutes maximum to work with. He will be pushing a new album, Working On A Dream, which drops just a few days before the Super Bowl. The “chatty” aspect of Springsteen espoused by The Sports Guy and Grzegorek is overblown. While true of a full Springsteen show, Bruce also knows how to get down to business and I expect him to fully maximize his allotted time with music, not talk.

Overall, I see this playing out in one of two ways. One is the traditional set, a la McCartney or Petty, with Bruce rattling off three or four bangers with possibly a new song thrown in. But I wouldn’t put it past him to go the Prince route either and bust-out a raucous non-stop 7-or-8 song medley with some R&B covers and some originals – maybe some hybrid of his famous “Detroit Medley:”

I think there are some songs that are easy to eliminate no matter what format he chooses. The sweeping, lengthy epics are out – Jungleland, Rosalita, NYC Serenade, Kitty’s Back, Incident, etc. All too long on their own and not conducive to a medley format either. The biggest 80’s hits are out too: Born In The USA, Dancing In The Dark, Glory Days, Brilliant Disguise – these just don’t feel like where he’s at these days and while they still pop into the occasional setlist, I don’t see any of them fitting into the halftime show format.

I do agree with Grzegorek that “Born To Run” is almost a sure thing, and I’ll go a step further and call it almost the guaranteed closer. It’s not only his biggest hit, but it is energetic and iconic enough to get even the corporate boxes and the 6 Arizona fans up on their feet. I even see it playing out as it does at every Springsteen show – house lights on full blast and at a rapid-fire pace:

I don’t think one of the new songs is as sure a bet as it would be with some artists, but I’m going to lean toward him playing a cut off the new record. I don’t think it will be the title track, though, and so my pick would be “My Lucky Day” – it is the best and most upbeat of the three tracks that are already in wide circulation and, well, it kind of fits the Super Bowl mood, no? I mean it’s sure as hell the Cardinals’ lucky day, right?

Figure on those two tracks consuming slightly over half the time and that leaves room for two more quick ones. I think both will be classics from the back catalog, eliminating newer material from The Rising and Magic. I think “Badlands,” “Prove It All Night,” and “The Promised Land,” all from Darkness On The Edge Of Town, are possibilities as are a couple tracks from The River such as “Hungry Heart” and “The Ties That Bind.” I think he’ll try and touch on as many different albums as he can here and avoid a double-shot off the same record. So my official guess at The Boss’ playlist is:

So there you have it. An over-analyzed stab in the dark that will probably be completely wrong. What if he came out and went 180 degrees the opposite way and just brought the whole mood down with, say, “Nebraska,” “Wreck On The Highway,” and “The Ghost Of Tom Joad?” That would throw the place for a loop. Incidentally, my dream 15 minute setlist would probably go something like: “E-Street Shuffle” > “Jungleland” > “Ramrod,” though that would be pushing the time limit for sure. Anyway, enjoy the Super Bowl (can we use that term legally or do we have to pay royalties to the NFL), the halftime show, the commercials, puppy bowl, the beer, the food, and whatever else gets you excited on a February Sunday evening.

Agree? Disagree? Have your own fantasy Springsteen setlist in place? Let us hear about it in the comments!

I agree that he'll work in a new song, whatever the "single" is. Not sure if he'll lead with it though. I'd put it in the 2 slot.

And BTR definitely closes the activities.

The Rising would have been a shoe-in if he hadn't just done it at the inauguration. But he may still have enough of an Obamarection that he may bust it out.

I'll be happy if avoids Pink Cadillac which is a terrible song.

I'd love to see a My Hometown/I'm on Fire/Philadelphia/My City of Ruins to bum everyone out, though.

"The Rising" has become kind of a go-to song for him lately but, much like Born In The USA, it's darker than it appears on the surface. So while that works in the rally/inauguration arena, I wasn't so sure that it fits the Super Bowl halftime mold. Otherwise, I'd agree that there was a good chance we'd get that one.

I don't know if it's physically possible for him to keep "10th Ave" under 10 minutes these days. That one gets the full preacher/story treatment live anymore.

On a different subject, I wonder if Mighty Max Weinberg and the Max Weinberg 7 will be relocating with Conan to LA? I know all those guys are Jersey/NYC based musicians. Would suck if Conan lost them, but I wouldn't be surprised if they didn't move.

"From Small Things, Big Things One Day Come" would also be appropriate for the game (and for Obama), but pretty obscure.

As for Weinberg, I don't watch late night shows any more, but how much would it matter if they had a different house band? Does Conan interact that much with him? And whatever happened to Anton Figg?

Weinberg is a huge part of the Conan show. It would suck without him. Well, not suck, since I guess they could overcome it, but it would be different. I don't think Max is replaceable from a comedy standpoint.

Nice work Hendge, and its a fun exercise. I agree with the Born to Run angle, but i'm gonna go a different route with my closing song, with an unsubtle shoutout to Obama. I do think he mixes a new song in there, and i think he goes with the title track.
I also agree that he won't do the epics persay, and i hope he doesn't go the medley route, cause i'm not a huge fan of that. So the songs have to be able to be arranged in 4 minutes or so. I also think he won't go that deep, and keep it relatively radio friendly to appeal to a wider audience.