The end of Rock of Love 2 (and my innocence)

Full disclosure: I didn’t watch the whole episode. I missed a lot of Daisy’s date (post vomit), and the whole spa day for the two ladies after their dates. So, it’s possible during the few times I flipped over to Law & Order: Criminal Intent to cleanse my soul that I missed the moments of serenity and speeches of redemption.

I doubt it though.

Quick recap to get us up to speed: Bret narrowed his choice down to 2 contestants – the mother figure Amber who dominated mud football and lied about her age (anyone else think she’s still lying?); and Daisy, the young lass who still lives with her ex-boyfriend, hung out with CC sometime in the past, and looks like Janice from the Muppets.

It’s such a nice corner we’ve all been backed into.

Instead of choosing to stay in LA (or wherever that ridiculous mansion is), Bret decides to take the two ladies to Cancun, to a lovely resort that beat us over the head with its name every 30 seconds.

Once in Cancun and past the hokey “traditional Mayan” dance greeting that everyone fawned over, (I cringe at the idea that people actually dressed up as Mayans and then performed for this trinity) we got to the meat and potatoes of the show: 2 days, 2 dates and a lot of tongue. 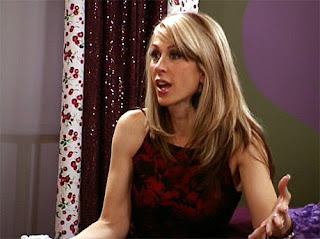 So Ambre thinks that the one thing going against her is that she isn’t “sexy” enough for Bret. Good for Bret, bad for the viewer. Because, while their date to some wildlife preserve(?), followed by a spa day seemed cool, their layvers in Make-out City every 6 seconds only emboldened my distaste for Ambre, Bret, and now the entire Cancun resort. Sorry Cancun, I will never be able to unsee those images. I wonder if the producers have some sort of make-out ratio for each show, and decided to throw it out the window for the finale?

Of course, that’s nothing compared to what followed. It’s something I like to refer to as “the most revolting 15 seconds of television in network history.” Ambre, still concerned about her “sexiness” factor, whores herself up enough to look like a matron at a brothel, and meets Bret for a romantic dinner. Unfortunately, Bret doesn’t take her to In & Out, which would have been all kinds of awesome. Anyway, so the two are alone (and when I say that, assume for the context of the show "alone" is defined as at least one cameraman, a director and a PA of some sort) and Ambre randomly announces she is not wearing underwear.

Fair enough. This would be sexy if a twenty-five year old said it. When a sagging “thirty-seven” year old says it, the luster is lost.

Ending there would have been one thing, but things go from distasteful to beastly. Bret asks to see(!) her proclaimed bare nether regions and Ambre more than happily obliges, probably thinking to herself that she’s got this thing wrapped (or unwrapped) up.

She goes all Brenda Bakke on us (note: Ok, so Sharon Stone would be the easier reference, but honestly, the first thought that went through my mind was the scene from Hot Shots! Part Deux), which left both mine and Bret’s mouths agape, though for completely opposite reasons.

After that it was drinks down and up to the suite where we were led to believe that the deal was sealed. At least that’s what I got out of it. I was contemplating how to get a Silkwood shower installed. 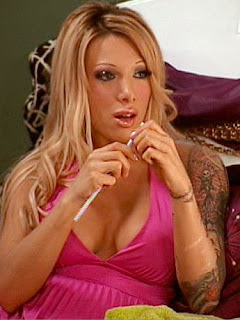 Bret’s date with Daisy consisted of deep-sea fishing. Sounds like Daisy drew the short straw on this one. Right away, Bret, in a rare attempt to see what makes Daisy tick, tries to engage Daisy in a semi-serious conversation. Daisy responds with a string of words that don’t really fit together, ultimately trailing off into confusion. And that was the best part of the day!

Things go from bad to vomit quickly, when Daisy realizes she doesn’t like fishing, boats, or her previous meal. In a rare form of decency, the producers choose not to show us her puking over the side of the boat, instead cutting to a strategically placed cutesy cartoon graphic of an explosion. The fishing trip ends abruptly, and it’s here I decide to bow out and see what wild leap of logic Goren is making (unfortunately, it’s a Logan episode, but I stayed with it. His partner in this particular episode was the boyish looking one, who though a mediocre actor, has a certain quality about her. It’s hard to put a finger on what it is, which only induces you to keep watching. Brilliant strategy by Wolf if that indeed was his strategy).
I figured it was Ambre’s to lose, and short of admitting her real age, she had it locked up.

My suspicions were confirmed when I flipped back around 10:20. Bret looked casually foolish in a silver suit and black bandana, dragged the elimination out, and tried to fool us all with the ol’ switcheroo by calling Daisy down first as though she got the pass. But no – her tour ended there.

And so another season of Rock of Love ends, possibly with Bret finding his true love (or mother figure). I’m happy and sad all at once; happy that my life won’t be consumed by this show; sad for the same reason.


And here's a horrible quality video of the climax!

This was first and only Rock of Love 2 that i saw...but some reason i couldn't turn away... Unfortunatley, you missed the part where they did show her upchucking over the side of the boat, perhaps you were cleansing your palatte w/ L&O: CI. And they did more than insinuate Bret bangs both of them, they practically showed it. Hopefully this one won't work out either...and RoL III is next.

I know the reason you couldn't turn away - it's Bret Michaels!

Seriously, Michaels is awesome. He does lose a little credibility when he kept saying the chicks were "Beautiful" and gorgeous. I'm like really? He's had to have been w/ tons of chicks 50x hotter than the two skanks that remained. He really needs to be involved in the initial contestant selection process if that's the 2 best he could muster. That one looked like she was pushing 40.

Se wasn't on very long. Like I said, she had boyish features. I think I have longer hair than her.

Not the redhead though - she's on currently. And not Annabelle Sciorra. The one in between them.