My Jam of the Indeterminate Time Period: Black Kids "I'm Not Gonna Teach Your Boyfriend How to Dance With You" 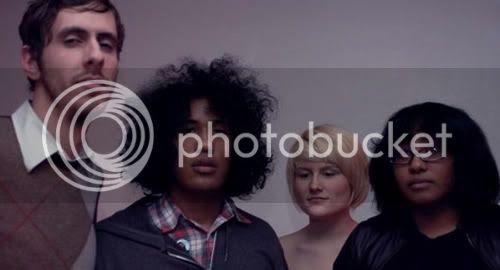 I'll try and do this every week (nothing resembling a guarantee about that). I'll briefly highlight a new (or maybe not-so-new) song that is currently infesting my brain. More often than not, it'll be something that caught my ear via Sirius. I want feedback, but I'll probably ignore it if it's not positive. Feel free to turn me on (dead man) to some other good Jams of Your Indeterminate Time Period.

My first entry is the Black Kids awesomely titled "I'm Not Gonna Teach Your Boyfriend How to Dance With You".

I'm not going to sit here cross-legged and tell you that this is the most original, genre-shattering, era-defining masterpiece. It's not. It's basically Robert Smith fronting The Go! Team (the lead singer may even be Smith's illegitimate mixed-race son). You could do a lot worse Frankensteining bands together, though. It has a great flow and is catchy as hell (likely to be a recurring theme).

The lyrics depict a story as old as time. Guy loves girl. Girl has jerk boyfriend. Guy employs sympathetic female backup singers to count to 4 in between his complaints. Guy won't teach jerk boyfriend to dance because "He's got two left feet and he bites my moves." Guy gets girl, but wonders how he compares to the jerk boyfriend. Just like in West Side Story.

I do deduct points for yet another "Black Plural Objects"/"Descriptive Phrase Kids" approach to band-naming. With a modicum of searching my brain and the Internets, here are a *lot* of other new-ish bands that follow this hackneyed pattern:
This needs to stop. Now.

I'm willing to be the bigger man, and sublimate my loathing for their unorigiinal name in exchange for singing along to the chorus. Also, I think liking a band named "Black Kids" makes you less racist.

While you're listening, check out this article from The Morning News where the author listened to 1 song by 763 SXSW bands and wrote a 6-word review for each.

Good idea for a post - I'll try to keep up the tradition and recommend stuff I listen to. Get ready for long-winded posts about funk bands no one has ever heard of. Oh, and mix in some Italian soundtrack music while you're there.

I've made a huge mistake.

Horrible production value on both these songs. It sounds like it was recorded in a middle-school music room with Tanara guitars and Casio keyboards. Maybe thats the intent, but I'm annoyed by the effort to convey lack-of-effort.

yeah that was the one thing I always hated about the Go! Team - their production was horrible, and even worse, very noticeable. Also - too much Cure not enough Go! Team influence.

Plus it's a song that uses counting as a key lyrical fulcrum, and ends with the highly original "Dance, dance, dance!"

Great production on this would be like using a bazooka to kill a guy with one leg.

please - using a bazooka to kill a guy with one leg? Totally awesome. If I could, I'd choose that every time.

I'm not saying it's not awesome, just that it's overkill and a waste of resources.

Save the heavy ordinance for Jerry's Kids.

BTW, thanks for making up that "hendge" User ID so it's not just us commenting on our own posts. Makes it just slightly less masturbatory.

Oh Hendge is very real. Very very real. As in not in my head. And now I'm not going to tell you who it is.

You guys are idiots - the song stinks . If you want to give me suggestions about music - make sure it rocks really hard, or makes me want to dance. Like any Billy Joel song.

Ummm ... it's spelled "hendge." If you're going to impersonate me, at least get that right. It's not an homage to Stonehenge.

"Okay, Lomez's place of worship is right on the right here ..."