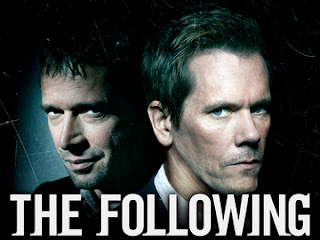 So, FOX has created a new show about a serial killer and hyped the fact that it you won't believe it isn't on cable.

It's called The Following.

It stars Kevin Bacon. And that might be the only reason you wouldn't believe that it's not on cable; the fact that Kevin Bacon is in this.

Because seriously, after the first episode, the number of suspensions of disbelief this show asks the viewer to make hover in the triple digits.

Let's get a brief summary of the show out of the way. Pretty much the set up is that of Michael Mann's Manhunter. An FBI agent hunts and captures a serial killer, but it takes a lot out of him - including his heart! (you see he has a pacemaker now keeping him alive. Also he drinks a lot. Unless the shot of him pouring vodka into a water bottle was to fake drink around people really was set up as pouring water from a vodka bottle into a water bottle for the audience. Because that's how this show works.)

The serial killer escapes. And escapes gorily. So the FBI calls in the former agent (that's Kevin Bacon if you haven't figured it out) to "consult." on catching him again. Which is fine, except for the fact that the "consulting" he does (meaning figuring out stuff the FBI and police can't) is really bare bones and kind of academic to police investigation 101. (Seriously, he was the one to figure out this guy was on the internet when he was allowed to go to the library to "research his case?")

So now that we know Bacon is a badass with a pacemaker, we are slowly immersed in the serial killer's new plan for infamy: teaching people how to be serial killers. As in, he finds (or found) people online during his prison stay, saw some psychopathy in them, and trained them to kill.

If you can get past that hurdle, it gets better, in that he also has them devise an incredibly intricate plan, that took years in the execution, to not only kill the one surviving witness that helped put him away, but also to kidnap his son. All in an effort to embarrass the FBI agent that caught him.

Look, Kevin Bacon is decent in this (he's not given a whole bunch to work with) and the guy who may or may not have been in The Faculty (I'm too lazy and ashamed to look him up) is eager to be decent in this. The rest of the actors though are cliched and boring. And the plot - I mean, at first, when I found out he was training serial killers I figured that's how they would keep this show going, by making it a "catch the killer" of the week. But watching the previews for the show, it seems it is not going in that direction at all, instead becoming a singular story about finding the missing child, which...

Look I'll suspend my disbelief for a show if I think it's going at least in a decent direction. But in the first hour of The Following, 3 characters "flipped" from being sympathetic to evil simply to shock the audience and make it extremely easy for the serial killer to pull off his dastardly plan. There was no set up, which meant the payoff was hackneyed and tacked on. Because now, we can't trust any character on the show. None of them. It has been established that apparently anyone can turn into a serial killer at any point when the show needs them to, including the MAIN CHARACTER (I'll get to that point in a moment). I guess that can work in this first hour, but now that it's been established so early on, I refuse to trust anyone on the show. And that's not fun for any viewer.

It also seems that FOX thinks that gore is the key to success, as many of the killings were staged with as much blood as possible. It seems in fact, that that is what FOX believes is the key to cable programming: gore. You know, since Mad Men has all that blood.

These of course aren't the only issues I had with the show, just the major ones. I'm sure they have set up some scenes to play off of and "twist" in later episodes. I'm also not sure if the pace will slow down as we move forward, or attempt to match the runaway train speed of the pilot. I'm hoping for the former; I'm betting we get the latter. I just wish the standard serial killer tropes were so abundant. It's as if the creators figured by stuffing more in, the viewer would be excited.

And then there's the Kevin Bacon role. As of right now, he's playing every cliche of a former, now disgraced FBI investigator. We're subjected to a few flashbacks from his initial investigation to show us how he got this way, (obviously he got TOO CLOSE to the case!) and what this entanglement will mean going forward. I will say this - and this is what I alluded to earlier...

I was mildly intrigued by the events of the night Hardy (Bacon's investigator) caught Carroll (the serial killer). It had been established early on that Hardy had started following Carroll, recognizing him as the main suspect. And since Carroll was a professor, Hardy was on the college campus a lot (it wasn't made clear whether he was posing as a student or what, but he alluded to hearing Carroll lecture, so I don't know other than I'm reading way too much into a show that doesn't deserve or hold up to this scrutiny). So, we see in flashback Hardy walking down a path and bump into 2 girls who are on their way to a house which, you guessed it - Carroll is waiting for them in. Hardy lets them go, then follows them back to the house, hears a scream and blammo goes in and gets stabbed but shoots Carroll and blah blah blah.

What I want to know is, it seemed as though when Hardy bumped into the girls, he was walking away from the house. It seems ridiculous as a coincidence, which would then suggest he knew Carroll was there. But if he did, he didn't act as though he did once he heard the scream.

It's all very confusing and obviously could be chalked up to an incredible coincidence...but if they introduce some sort of hypnotism plot line, I'm going to be very disappointed.

Even more disappointed than I am currently with this show. And that's saying something.