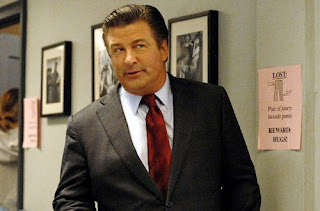 It's no mystery that we here at the Popcorn Trick love Alec Baldwin. Though we obviously don't know him personally, he appears to be a regular person. He has a passion that sometimes may go too far, an intelligence that probably gets him into more trouble than it's worth, and a propensity to speak his mind, which definitely has caused him heartache.

Here's the thing...what normal, sane person doesn't act the same way? His weaknesses give him more humanity, and therefore make him more human, which lead him to some of his better performances. Performances that while he may not think are great, still demand the attention of us all. Because whether or not he believes he is gifted as an actor, or that his performances have been uneven, he has brought joy and entertainment to countless audiences.

The reason for this Baldwin outburst is this article in The New Yorker, in which Mr. Baldwin comes across more human than ever. Midlife crisis? I have no idea, but I certainly felt as though I could have one after reading it. So instead of allowing such a sour, dour taste to linger until the new season of 30 Rock starts (end of October I believe), I say we should rinse our mouths with happy Baldwin and celebrate the genius performer with a few clips of him performing. Perhaps not the funniest ones (I purposely excluded Schweddy Ball and Canteen Boy) or his finest performances (nothing from the Oscar nominated The Cooler) but I believe that this collection is a nice cross section of who Alec Baldwin really is...

Sure it may be a cliche to put this on the list, but c'mon. Talk about a performance that jolts the movie. Baldwin is on screen for roughly 7 minutes, and in those seven minutes, he delivers lines that are probably used to this day in any sales office. He spits Mamet's dialog out all over the other actors, (none lightweights themselves) and takes what could have been a flashy, over-the-top character and delivers the malice so that it's real. I'll even add the SNL parody that Baldwin did of it...

It's funny - though the dialog is roughly similar, with a few different nuances, Baldwin goes from playing a winner in Glengarry Glen Ross, to playing more of a buffoonish loser here in The Departed. This is included simply for the last line and the way he delivers it so matter of factly and all at once. It makes an otherwise overrated movie somewhat enjoyable.

For the longest time, this is how I thought Alec acted in real life. Hey, I was young and naive.
Anyone else rooting for Baldwin in this one? I mean c'mon, that Paxon fella was kinda generic, no?

Alec's Andy Kaufman moment, compliments of Gary Shandling. Don't ask me what's going on here, all I know is that it's an extra on a Larry Sanders DVD, so I can't be sure how much is real and staged. Baldwin certainly looks like he knows what he's doing though in the ring.

Such a throwaway skit that more than likely aired around 12:50, yet Baldwin is great in it. I'm just surprised so many people turned down Ric Corman.

Alec Baldwin playing Charles Nelson Reilly? It's like I died and went to heaven. I imagine with CNR's overly dramatic gesticulation, it would be easy to mimic him, still I applaud Baldwin for going all the way with it.

Rapid fire sexual tension between two skilled liars trying to dupe the other. Brilliant delivery of the last line.

Impersonator isn't one of the skills you think Baldwin has, but he's dead on here. And if you don't know who he's doing, you suck.

It can't be easy playing the master next to the master.

Included simply for the last line.

And finally, while I can't embed it, it's worth the click. I won't give anything away, except that I doubt you've seen it.

Maybe he doesn't have the resume of Jack Nicholson, but that's not the point. Baldwin has nothing to be ashamed of in this life, and very much to be proud of. I hope one day he sees that, and accepts it. I know that I'll still keep watching him.
Posted by Goose at Wednesday, September 03, 2008

Love the post. One of my favorites from SNL is "The Mimic". Can't ever seem to find a clip though. Alec is Awesome!