The nightmare of watching Kitchen Nightmares with Gordon Ramsey 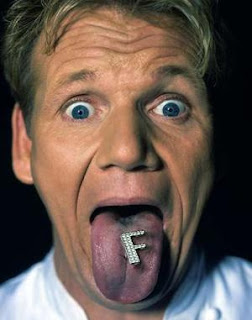 I get it. I really do. I know conflict in reality television equals entertainment, and thus, more conflict equals more entertainment and more ratings. It's a simple equation to follow. Bickering breeds ratings.

But it can only go so far, before it becomes a forced farce. And I think I've seen the breaking point - on Gordon Ramsey's Kitchen Nightmares last night.

I'll tell you all about it on the flip side...

Hell's Kitchen has positioned Gordon Ramsey as a dickhead chef that hates everyone and demands the absolute best quality. Something, I might add, that I want in all chefs that prepare my food. But if you watch him on his original series on the BBC, Kitchen Nightmares, he really doesn't come across like that. He's much more passionate and sensible with the customers he's trying to help. So it's obvious that American television feels the need to titillate and shock. Fine, I'm resigned to that fact. It certainly goes a long way toward painting Americans as assholes that that yell a lot and demand ice in their drinks.

The American of Kitchen Nightmares kicks up the conflict, increases the controversy and makes turns Ramsey into a culinary Morton Downey Jr. Now, don't get me wrong, I'm not complaining about this. Many of the restaurateurs need this behavior because they're idiots. And none more so than the guy last night...

Quick explanation of the show if you've never seen it before. Ramsey visits a failing restaurant, and makes it over so it's more successful. Along the way his "helpers" spruce up the joint (as many of the places he visits have decor that Popeye Doyle would consider dated), and everyone is happy by the end of the show.

In the middle, not so much. Case in point last night.

I won't go into the intimate details of the show, but I will say at one point, the owner was on the phone ready to sell the place. The reason? Because Ramsey called him out on a few things. You see, the guy had recently bought the place, and in 6 months turned had it up and running. But he apparently forgot a few minor things, such as cleaning it, and hiring a competent chef. And Ramsey called him out on these issues, peppering in a few "fucks" for effect.

The owner didn't take kindly to this, and left. Quit.

My problem isn't with the exchange, my problem is with the owner's attitude. What did he think he was getting into when he contacted the producers of Kitchen Nightmare? Because, obviously, there's a screening process...Ramsey doesn't simply choose restaurants at random to go fix up. There's a process involved. Did the owner never watch the show before?

It angers me that there are people in this world that stupid. When the guy wanted to put his restaurant up for sale, I really wanted Ramsey to buy it, turn it around inside of a day and put this guy in his place. Sadly that didn't happen; the wife intervened, listened to Ramsey, cried a bit on the phone, got her husband to buy into everything, and everyone showed up at the place the next night with a new menu, a spruced up place, and Dee Snider.

Apparently Ramsey knows "American rock legend Dee Snider" and got him to show up. I really don't know why, but by then I wasn't asking questions.

Yes, it's possible the entire thing was staged for entertainment value and I've been duped, but I don't want to be that jaded in my life just yet. Reality television's version of the 21 scandal hasn't happened yet, so for now, I'll assume it was real.

Even the Dee Snider/Gordon Ramsey friendship.