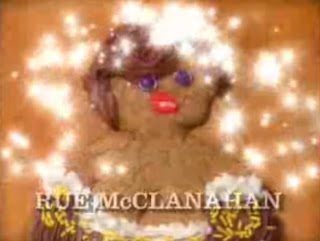 I'm back after a long township-imposed hiatus that involved a little bit of travel, a lot of work, and even more laziness. For possibly the first time ever, I shan't be recapping a Podcast, or dissecting in minute detail a little slice of TV heaven.
Inspired somewhat by Goose's recent 3-packs of YouTube goodness, I'm going to delve a little deeper into one group's YouTube efforts.
The good folks at FatalFarm have apparently decided to squander their brief time upon life's stage by re-imagining the opening credits to classic TV shows.
And even though the results are decidedly a mixed bag, I'm glad they did.

Some of these have adult themes, so those are marked with "NSFW" (Not Safe For Work). You've been warned.
I'm going to include more of the hits than the misses, but if you want to check out all of FatalFarm's work, here are a couple of links:
FatalFarm Home Page (includes other projects by them, including a live-action take on Garfield)
FatalFarm YouTube Page
So here we go...

An ex who liked Golden Girls more than is probably healthy tipped me off to this video and it was the gateway drug to the rest of them.
The first half of this is vanilla video of a faceless chef who makes Gingerbread cookies that look eerily like each of the main characters on the show.
Then the cookies morph into video of the real characters.
Then it gets weird.
Who cares? I just want to motorboat Gingerbread Blanche.

Stupid media companies have taken down the YouTube version, so check out the one on the Fatal Farm site.

I never watched this show much, but if they had filmed it with the cast in this clip, I would have crazy glued my forehead to the screen for fear of missing it.
You start with a murderer's row of Forsythe, Evans, & Corley. Than sprinkle in the likes of Tandy, Olmos, Cheadle, Stockton, Farrakhan, and a double shot of Weller.
And there's a surprise NSFW A-lister who's playing Alexis. I won't spoil it for you, but hang in till the end. It's worth it. Trust me.

Who knew that ALF was into such kinky shit? Well, apparently the Tanners did. At best they excused Mr. Shumway's depravity with a chuckle and an uncomfortable "That's just ALF-being-ALF". At worst, they would get a good family circle jerk going every time ALF got a new tape.

I think this was after my time. Yeah, I'm old.
But now? Now, it's squarely in my wheelhouse. Religious harangues that make me think of Tijuana donkey shows + dancing + dangling wangs = "How can I intern on this show?"

There's more cartoon action in the Dynasty one than this cautionary tale of Internet romance gone horribly, horribly wrong. But you'll be ready for a Shawshank Delousing after this one.
And the Dre/Diddy shout-out the end? Nice touch.

1. Cheers - Shelley Long Is Learning Arabic As We Speak

Apparently the Binford Tools magnate is quite rich and a master of impersonating head shots.
Not creepy at all.

A guy with really weird eyes (special effect-induced or otherwise) whose cartoon word bubbles give birth each of these sassy Southern ladies? Check.
A frisky Annie Potts? Check.
Shirtless, bowtied weird eye guy in the tub when he "speaks" Meshach Taylor, thus rendering you unable to watch Mannequin or Mannequin 2: On the Move without that image popping into your head? Check and Mate.


4. Munsters - The Tortellis on Shrooms

If you like Dan Hedaya, you're gonna love this. For some reason, this was the only one not uploaded to YouTube.
Munsters QuickTime Movie

I'm guessing whoever came up with this idea came home from the bar at 3 AM and gorged themselves on artificially flavored fruit snacks while jerking off to Baywatch. And in the pud juice-soaked aftermath, they decided to try and write the fruit snack purchase off as a business expense by putting together this cinematic bucket of week-old afterbirth.
The only upside is that I get to link to the sorta-newsworthy item that Hasselhoff's son from the show is in a "celebrity" sex tape.

Hopefully you enjoyed these as much as I did, if not more.
Cline
Posted by Cline at Wednesday, September 10, 2008

I have no idea what's going on.

I found great Trove hack , if you need some credits for Trove you can check it.