What’s a great evening of music without a few glitches? Besides less stressful, that is.

Luckily all of the glitches were relatively minor and easily remedied.

A brief recap of the show and a music from that night after the jump. 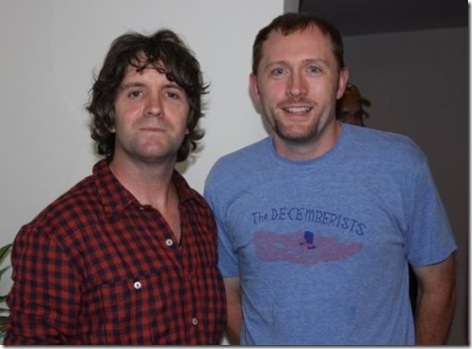 How This Came To Be

I’m not sure why the wild hair got up my ass to start doing house shows again more than a year after the inaugural one. But a wild hair up one’s ass is not just a evocative phrase. Admit it, you’re picturing a scene composed primarily of my ass and an anthropomorphic hair sneering in its tiny leather jacket. And if you weren’t, you are now. You’re welcome. My only question was how does a hair wear a jacket without arms or a neck?

So one night in mid-June, I was checking out the touring schedule of Two Cow Garage (criminally underappreciated cowpunk/rock band out of Ohio), I noticed they had a gap in their schedule between Baltimore & NYC. I can’t really blame them for not playing Philly since only a handful of people went to their shows in West Chester & Philly last time. So I emailed them and asked (a) were they playing in Philly and (b) would they be interested in doing a house show?

I never got a response from them, but luckily the next day I emailed the touring manager (Andrew Colvin from Ground Control Touring) of Jason Isbell. He’s a former member of the Drive-By Truckers, and a prodigious talent. Figured this was more of a long shot because Isbell plays some decent-sized venues. And if he ever did play an acoustic show in my house, you couldn’t crowbar the shit-eating grin off my face for several weeks. And that can’t be good for my complexion.

A couple days later Andrew contacted me and asked if I could get 40 people in my house for Jason. I did some quick calculations, wishfulled a little thinking and let him know I could. That ended up not working out for scheduling reasons, but I told him that if he had other artists (Cat Power, Felice Brothers, Jenny Lewis, M. Ward, etc.) they represented, I would be very interested.

He then contacted me on 7/6 with a “crazy last-minute” offer for Tim Easton about 3 weeks later. The date was less-than-ideal, since it was the Monday after Wildwood (huge beach Ultimate Frisbee bacchanalia) and a lot of my Ultimate friends would be in detox mode.

But I had heard good things about Tim from fellow Marah fans and think I may have even seen him open (for Wilco maybe?) once or twice.

Most importantly, I was dead set on getting this house concert thing going. And if it went well, it would hopefully grease the skids for more artists and more fans down the road.

And that determination paid off.

How It Went Down

I had taken the day of the show (7/27) off from work to recover from Wildwood and prep for the evening’s show. As always, inviting friends (and in this case, some strangers) to one’s house is the best impetus to clean your place.

A day of doing just that ensued. I also rearranged furniture and borrowed a few folding chairs (I Craig’s Listed a decent amount but needed some more). By 7, my house had officially become a venue.

A few people showed up early, including a longtime-friend (Dave) of Tim’s that just happened to be in Philly. Then I left everyone to hang out while I went to pick up Tim from the train station. On the drive back, he asked me how long my shows usually go. Since this was the first show not performed by my friends, I told him honestly it was up to him.

Upon my return, the joint was indeed jumping. I quickly made the rounds to collect everyone’s $, but could not really socialize too much.

There were a few people who bailed last-minute, but they were the ones who missed out on a great show.

A few late stragglers sheepishly sidled into their seats as local musician Jason Cohn (a big fan of Tim’s) opened with 2 numbers. And then the glitches reared their rugged and world-weary heads.

Glitch #1: At Dave’s request, I dimmed the one light in the living room, an old halogen lamp that is usually more than enough light for the space. He said Tim usually performs by candlelight. OK…

I turned around and took my seat in the dining room (performers are in the corner of my living room and there are good sight lines from both rooms). And all of a sudden the living room was completely dark.

My initial assumption was that a wiseass friend of mine and jumped up and turned the light off to F with me. But no, just like in high school, the troublemakers were in the back and could not have quickly and quietly performed the deed.

Instead, the bulb which I last changed in roughly 2003 decided to shuffle off its mortal/tungsten coil at the worst possible moment. I racked my brain to think if I had another light I could bring downstairs. The lighting in my house is plentiful, but problematically lacking in the mobility department.

Plan C would have involved driving my car up on the lawn and shining headlights into my living room. Luckily I had a vintage PBR lamp in my bedroom to provide dim lighting which could charitably be described as “romantic”.

Glitch #2: With the lighting issue sorta resolved, I stood before the assembled throng (are 26 people enough to qualify for a throng? Screw it, it’s my house. It’s a throng), and introduced Mr. Tim Easton.

My eyes darted quickly around the room to make sure he wasn’t disguising himself as a chair. An irrational thought, sure, but panic does strange things to a man’s mind. I thought maybe he was using the facilities upstairs, but got confirmation that it wasn’t the case. I was running out of potential places to look. Before checking the oven (again, panic), Dave chimed in that Tim likes to take walks to clear his head before shows.

So I race outside and look all around and finally see him walking down my street about to turn the corner and out of sight. I called his name and got him to come back and start the show and all was well.

What followed was an entertaining, nearly 2-hour of set of bluesy folk with some country tinges and keen lyrical eye. He engaged the crowd, both those he knew already and those he didn’t. He had a number of existing fans there and certainly made some new ones.

He also complimented me on my house, saying that it definitely had a women’s touch. In your FACE, everyone who criticizes my decoration.

Thanks to everyone, Tim Easton included, who made the evening such a rollicking success. Next up is Robbie Fulks, who will be appearing at The Cline Compound on November 22nd. Details here.

How it Looked and Sounded

Some pictures from the evening can be found here.

The 19(!) songs that Tim did, as well as the 2 by opener Jason Cohn are available via the magical splendor of YouTube.  Much thanks to Shane for all the hard work recording the show and processing the video!

Nice recap. If I lived anywhere close, I would be a regular at these.

And nice catch with Robbie Fulks. I have one of his CDs from way back.

Very cool...some people around the corner from me on 6th street in media used to host house concerts. I went to see Frog Holler there a few years ago, great time, and cool intimate setting to see a show.

Isbell would have been cool as shit to see...