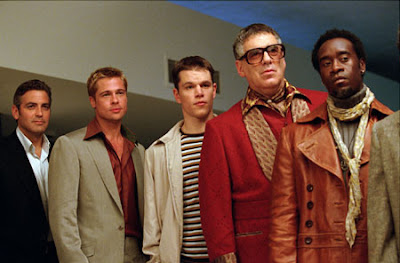 This is part 2 in a continuing series looking to choose the defining movie of the 2000s. Part 1 is here.

2001 did not live up to the world Clarke/Kubrick envisioned, that's for sure. No crazy, murderous computers, no big monoliths, and no trips to Jupiter. No, 2001 cinema did not rock the boat much at all. In fact it didn't rock much of anything, unless you count this as rock:

Yes, Moulin Rouge was nominated for an Oscar in 2001. And even though I have a soft spot in my heart for it (and a lot of that has to do with Nicole Kidman), I can't in good faith list it as a contender for defining movie. So let's take a look at the Oscar nominated films from that year...

A Beautiful Mind
Gosford Park
In the Bedroom
Lord of the Rings: The Fellowship of the Rings

A Beautiful Mind was a nice little movie with an Oscar written role for Russell Crowe. Of course, it wasn't Crowe's best work. That would be this:

Gosford Park? More like Gosford Snore, am I right? Yeah ok, it was directed by Robert Altman, and it's an old fashioned murder mystery, but the beginning of this one makes the Deer Hunter wedding scene look like a subliminal message.

In the Bedroom? Seriously? I don't know 2 people who've heard of it, let alone seen it. Look, I have no doubt it's a great movie, but reading the synopsis (don't if you want to remain spoiler free) makes it sound like a special episode of Law & Order. And not even Law & Order: Criminal Intent.

That leaves Lord of the Rings, the first installment of the grand trilogy. I'll begrudginly put it on the short list so that the geek army doesn't curse me in elven (elvish?) tongue. But note to the oddsmakers, it's not going to win.

But don't fret - 2001, has a couple other heavy hitters that will be considered...

The Royal Tenenbaums
A cast to die for with a well written script and quirky, unfamiliar directing makes this a favorite to be the "It" movie of the decade. Wes Anderson's second movie is a mix up of comedy and tragedy, with many other genres thrown in for good measure. Though it seems he has fallen into a repetitious rut with his last few outings, The Royal Tenenbaums takes a fresh approach to the cliched "my family is wacky!" motif.

Donnie Darko
Ugh. Disclaimer: I am not a Donnie Darko fan. At all. I made the mistake of watching the director's commentary once. What I thought I understood about the movie was shattered when he started labeling Donnie Darko as a superhero. He lost me there. What could have been a decent movie about time travel and how our actions affect things we don't even know about turned into the nerd anthem of the decade. Which is why I have to include it on the short list. But don't think I'm happy about it.

Ocean's 11
On the other hand there's this gem - a movie I love. If this were a "Find a defining movie for my house" this series would be over right here. Here's how bad it is. I enjoyed Ocean's 12 (except for every scene Julia Roberts was in).

This was a slick remake of the corny Rat Pack version and it blows the original out of the water. An all star cast, taking it just seriously enough to make it work, Ocean's 11 is a breezy caper that hit all the right notes. Ocean's 11 matched the vibe of the high flyin early part of this decade, and it's enjoyable with repeat viewing. Of course, one question remains - how did they get the stripper pamphlets down in the vault?

Freddy Got Fingered
Shouldn't aguably the worst movie ever made get some attention? To be honest, not only do I not think this is the worst movie ever made, I actually enjoy it. I'm not sure what people thought going into this movie, but it definitely met my expectations of what I thought a movie created by Tom Green would be. But seriously, I'd be willing to be if you polled 100 people what they thought the worst movie ever made was, this would have a good chance to come out on top. Because of that, it has to be at least considered. I do enjoy the moral outrage displayed here:

Is Roeper likening this film to the 9/11 attacks in that clip?

Super Troopers
While I don't seriously believe this movie should be considered, I did want to call it out for a second. I truly believe if Broken Lizard (the comedy troupe behind the film) had gone on to create better films after this one, we'd hold this movie up as, at the very least, a defining comedy movie. That they followed it up with Club Dread (a weird, schizophrenic movie that tried to straddle genre boundaries and failed) and Beerfest (which I actually find amusing) only tarnished their reputation. Oh well.

Anyway, that pretty much wraps up the list of movies we can consider for the "It" movie of the 2000s. But I am not finished with 2001 yet. Because in doing my research, I came across a number of movies that were just plain bad, and I felt the need to call them out...

3000 Miles to Graceland
I guess it's possible Kevin Costner's agent suggested to take a role that went against type, but how either wound up choosing this one is anyone's guess. Elvis impersonators' rob a casino and then double cross one another. Oh and kill dozens along the way. When will criminals learn, it pays to keep a low profile after stealing a lot of money?

The Animal
I'll give Rob Schneider this much. He found his niche and made a lot of money. Meanwhile I write this blog and receive no money. So I doubt he cares what I have to say about his movies. Still, they suck. 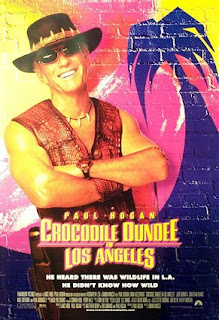 Corky Romano
"Famous" for having Chris Kattan dress up as a girl scout and utter the phrase, "would you like to buy some cookies?" that's pretty much all I can remember about this film. And yes, I've seen it. I get that SNL people can churn out a quick movie and make cash for people, which is fine, but doing that certainly tarnishes your comedy credibility. I'm looking in your direction Lorne Michaels...

Crocodile Dundee in L.A.
It's like Hollywood isn't even going through the motions anymore. What was the thought process to get to part 3 not only greenlighted, but also to the actual screen? Wait, don't answer that, I don't want to give execs and hints to get Crocodile Dundee: We're in Space off the ground.


Driven
This movie is bad. No, wait it's beyond bad. It's past the point of the supposed so-bad-it's-good-line. Way past. Here, I leave you with this. I dare you to get through all 8 and a half minutes of this:

The Royal Tenenbaums
Lord of the Rings: The Fellowship of the Ring
Donnie Darko
Ocean's 11

Yeah I have the same question as Mel as to where memento is on the list, but oh well. With the ones that you have listed I think that Ocean's 11 was the most defining of the 2000s. The movie seems to be a re-imagining of typical heist movies and it keeps the audience enthralled until the very end. Overall I thought this was a very good analysis of the films from the year and I can't wait for your final judgement.

I agree with Donnie Darko and The fellowship of the rings but Ocean'11 and Royal Tenenbaums are just OK and shouldn't be selected.

What about Spirited away ?

•Amelie
•Black Hawk Down
•No Man's Land (Best Foreign Film Oscar winner that year)
•Monsters Inc.
•Shrek: not a great film (though clearly that does not matter if you're putting stuff like Freddy Got Fingered and Ocean's 11 on here) but since this decade has really been defined by something you haven't mentioned- franchises- it should be noted as one of the very few franchises not based on a well-known property to come out of Hollywood sine the 80's)
•Harry Potter and the Sorcerer's Stone: another highly successful franchise picture, a movie that lead off what will be th highest grossing overall franchise of the decade