This is part 3 in a continuing series looking to choose the defining movie of the 2000s. Here is Part 1 and Part 2.

I'm going to stop starting these by saying it was a weak year for movies, because it's only going to get redundant. Just immediately assume it when you see a new edition here. Because, whoa.

As has become tradition, let's start with the Oscar nominated films of the year...

Gangs of New York
The Hours
Lord of the Rings: The Two Towers
The Pianist

I'll be honest, I don't see a big movie in the bunch. Gangs of New York was Scorsese's desperately plea to get an Oscar, and it showed. The Hours I think starred Nicole Kidman with a weird nose. The Two Towers had promise being the 2nd movie in a trilogy, but it kinda got bogged down with too much plot (my opinion of course - nerds, fall back!) and it took me about 20 minutes to realize it wasn't the movie that Harvey Keitel gets naked in; it's the movie about Nazis and pianos.

Adaptation
If I had my way, we would end the debate right off the bat, and consider Adaptation as the one movie that defines the 2000s. Unfortunately, I don't think too many people would agree with me. And that's too bad, because this twisty mindfuck from director Spike Jonze and writer Charlie Kaufman really captured the post ironic, absurd world we currently live in. I've yet to see a movie capture both the storybook cliches AND the back alley, throat cutting sides of Hollywood in such an earnest and refreshing way. (My other theory about this movie is that "The 3," the script Donald Kaufman is working on throughout the movie is the actual movie Identity, starring John Cusack. If that ever came out I would high five myself, mostly because I can't find anyone else that really cares about this.)

Bowling for Columbine
A Michael Moore documentary - the one before Farenheit 9/11. It's getting harder and harder to call Moore movies true "documentaries," since he add so much of his leanings and views in them, but that doesn't diminish the power of the films he makes. This one, about guns in American culture certainly raises issues and pushes a lot of the right buttons...enough so that a documentary left a mark on society. I'd say moreso than Roger than Me, his first film. While there certainly is a left leaning vibe in Bowling for Columbine, I do believe Moore set out to try and create a balanced movie. We'll keep his later forays into filmmaking out of this. But this definitely has to be considered a candidate.

The Bourne Identity
Can a movie that out Bonds a stale James Bond franchise be considered a candidate for the defining movie of the 2000s. Yes and no. Yes, because it definitely kicked the stale Bond series in the balls, delivering a sharp, fast paced spy movie for a new generation. No because, when you come right down to it, it's an action movie that aside from some quick editing and cool stunts, doesn't do much else. We'll keep it on the list mostly for the fact there aren't too many other 2002 contenders.

The Ring
A scary, well made horror film is rare, but not so rare that it should be considered a defining movie of the last decade. So why put The Ring in the conversation? Because it was the first film that remade a Japanese horror film, that spawned dozens of imitations and opened the door to Japanese horror. Unlike the traditional American horror genre, which can usually be summed up with the term "slasher" (obviously there are exceptions), The Ring employs more atmospheric horror, a novel approach at the time. That the story isn't particularly original, nor is it acted all that great, is overshadowed by the "Japaneseness" of it, and it went on to be quite successful. For that reason, I'm including it on the list.

While that might be the short list of defining movie candidates from 2002, I obviously can't close this without looking at some of the lesser movies of the year... 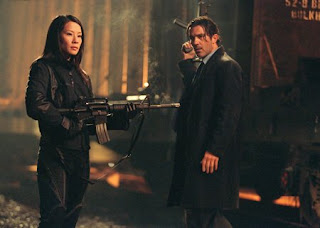 Lucy Liu, seemingly not stretching her acting chops too much plays a sexy Asian spy. Antonio Banderas stretched his acting chops way too much playing a sexy spy named Jeremiah Ecks. Please feel free to read the wikipedia synopsis here and then try to explain it to me. My head hurts.

I do find it mildly surprising that Rotten Tomatoes has declared Ecks vs. Sever the worst movie of all time. Although the biggest surprise of the Rotten Tomatoes list? Not only is Freddy Got Fingered not in the top 10, it's not on the list. I would have lost a lot of money betting on that.

And just for your reading pleasure, I am including a link to Roger Ebert's review of Ballistic: Ecks vs. Sever, which I find immensely humorous.

Crossroads
Not the Ralph Macchio makes a deal with the devil and doesn't age movie; the Britney Spears makes a deal with the devil to get fame and fortune for not doing anything really. Actually, I can't comment on the plot of the movie since I never saw it. Checking it's wikipedia page, I see that it was written by Shonda Rimes, the same person who created Grey's Anatomy. It all suddenly makes sense to me. Taken directly from the wikipedia page, here is the plot description:

Three friends get together and bury a box making a pact to open it at midnight at their high school graduation. In the little town in Georgia that she really did they live in, things soon change. One is little miss perfect, one is an engaged prom queen, and the other is a pregnant outcast. The night of graduation, they open the box and they strike up a conversation. All of a sudden, one brings up the topic of her going to Los Angeles for a record contract audition. They all decide to go together and they leave. With a little money, they set out on the road with a guy named Ben. When one of them tells the other a rumor that he might be a homicidal maniac they are all scared of him. When they reach LA, Lucy (Britney Spears) falls in love with Ben and against her father's wishes, she stays and she goes to the audition.

I'm pretty sure I haven't missed much not seeking out this movie.

Juwanna Man
History's only WNBA movie? It's gotta be worse than Eddie, right? Speaking about Eddie, I have a horrible confession...last weekend, I watched about an hour of Eddie. Instead of being repulsed, I was fascinated by the atrocity, specifically because Frank Langella (who plays the owner of the Knicks) began a romance with Whoopi Goldberg after the two met on the set. Looking for the sparks that set that romance off, I unfortunately, I could only last an hour. I mean, this movie is bad. I also assume any suggestions of the budding love sandwich this movie created came in hour two, because I didn't see anything.

What I did notice, however, was the unbelievable amount of NBA talent they got to star in this. Basketball players must really like the limelight. Here's the list...

With that talent you could probably cobble together a fairly mediocre basketball team. I especially enjoy the fact that Malik Sealy was tapped to play the primadona superstar, Stacy Patton. Apparently Harold Miner wasn't available.

Adaptation
The Bourne Identity
Bowling for Columbine
The Ring

Please offer your suggestions in the comments below.

A defining movie of an era, in my opinion, has to be either creating a new genre, or reviving an old that was dead and buried. Or it has to introduce groundbreaking technological advances, or a new form of storytelling, etc. etc. It can't hurt if it makes or breaks a star in the process.

Either that, or it has to be the "best" movie of the decade's most prevalent genre. Which is really hard to say objectively.

Your lists are mostly collections of movies you liked or thought enough other people liked, and as such, I don't think this qualifies as a collection of "defining movies".

Memento deserves to be contender for its new kind of story-telling, for instance. Gladiator deserves a spot because it revived sword-and-sandal epics, regardless if it's a good film or not. Amelie could also have been included since it introduced a quirky genre and form of storytelling to American audiences that has since been adapted (no surprise here).

If you're looking to get any kind of meaningful list, you should be looking more for features that are really "defining", in my opinion. I do think that some of your selections are valid, but I'm not sure that you made them for the "right" reasons.

I definitely agree with Memento. It is THE film of the 2000's.

1. Adapation - YES
2. Bowling for Columbine - YES
3. The bourne indentity - YES but not as much than the first 2

4. The ring - no way... Come on, the original Ring (Ringu) is much better. Why put a remake in your list ? Do you really think a so-so remake should be seen as the best movie of a decade ? give me a break...

And the Pianist is a really good movie. At least, in my opinion.

For example, City of God (Cidade de deus) is definitely one of the best films of 2002 and should be on your list. You should see it...

Your lists have been poor so far...here are some obvious, serious omissions.

I am surprised that you left off what I think might be the best movie of the decade so far, Y Tu Mama Tambien. If you haven't seen it you should, and it's just brilliant in every sense of the word.

All I have to say: go to freaking film school before you feel you need to write a blog on films. To not see Almost Famous or Mullholand freaking Drive.
And yet to mention Crossroads.
For shame.

One thing that I think was missing from your analysis of Bowling for Columbine was, and this may sound odd, its popularity. Before Bowling for Columbine, most of the average moviegoing public probably wouldn't have even considered going to see a documentary, but people saw it, and discussed it, and I'd argue that there have been more wide releases of documentaries as a result of it.