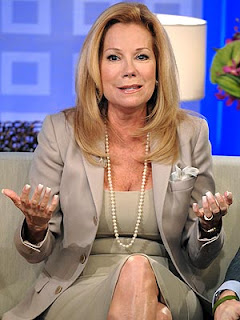 Quick thought before we dive into the links. Has anyone actually sat and watched the Kathie Lee Gifford portion on the Today show? Oh my god. If the remote were closer and I wasn't doing other things, I think I could tolerate about 12 seconds of it. But now, since I've suffered through the first 14 minutes, I using it as a test of my endurance. How far can I really go? I'll give you an example of what I suffered through - Kathie Lee, trying on a candy bra. Let's move on.

It's about time someone chose to make a period piece alien movie. And why not Elton John. This has a recipe of being awesome.

Looks like Jacko needs some cash. How much would you pay for his socks?

I know I've been dying to know what Lincoln would have on his ipod.

Better head over to that indoor ski resort soon - Dubai is crashing.

Vegetables are becoming less healthy. Scary, and I bet this story won't even get picked up.

Going to a gunfight? Make sure you follow the rules.

What does David Duke think about the Obama presidency. Something tells me he's not being 100% candid with the interviewer, being that it's NPR. Just a gut feeling.

Is being scared to death an actual possibility?

Read about the people who made The Godfather.
Posted by Goose at Tuesday, February 17, 2009