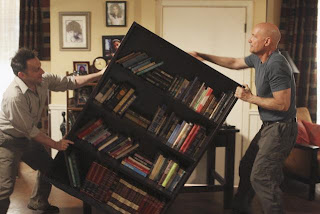 "Get the faith out of my Lost!"

That's the twitter I sent out last night during the episode. Not because I'm not a believer in faith. That's not a debate to get into right now. I can certainly enjoy a show or movie (or book or other form of entertainment) that deals with faith in a positive and constructive way. But having it show up on Lost last night irritated me, because after a great start to season 5 with a lot of questions answered and new potential (and I'm way on board with the time travel and have been for quite some time now (I'll keep pimping myself too with that link)) they have reintroduced the idea of faith/religion having a large relevancy with what is going on.

I get the fact that Jack is a man of science and Locke is a man of faith. And that they are juxtaposing those notions this season (Locke is currently embroiled in some of the scientific aspects of the island; Jack has to believe in things he doesn't understand) but the faith subplot has largely been a minor point so far this season until last night. The whole recreating the craqsh to the best of your ability seemingly has no rational explanation, nor does Locke having Jack's dad's shoes on, which was a pretty huge disconnect for me. Now, if they go ahead and explain it in an upcoming episode and it makes (at least a little) sense, then I'm ok with it. But right now, as I watched, it took me out of the episode and annoyed me. Oh well, that's my rant.

Some other thoughts from the episode...

About five minutes in I got a text from my resident art geek telling me that lamp post is a reference to The Chronicles of Narnia and that the painting in the monastery (for lack of a better term to call it) was Doubting Thomas. Luckily, soon after that we got a little more explanation from Ben about the painting (though seriously, can we ever take anything Ben says at face value at this point) but I have no idea what the name, "lamp post" signifies. I also would have never gotten that reference, so kudos to my art geek friend.

Ben covered in blood at the marina? I'm not saying I know what's going on there, but I will say I have a bad feeling about Penny's whereabouts right now. Revenge for Alex? I guess we'll find out. I will say the first time I've ever really seen Ben flustered was in last week's episode when he saw Desmond show up. It was as if everything else he had figured out except for the Desmond curve. We'll see if that comes up later as well.

So, are we going to get a whole bunch of new castaways on the island? Seems as though there was a correlation between how accurate they could recreate the initial plane crash to how close to the "present" they could get to on the island. And no, I can't explain that sentence.

Ben is upping the dickishness, isn't he?

Anyone else think Desmond was going to hit the pendulum when he was talking to Eloise? Why didn't he just grab it? Ride it around a little bit? Like you wouldn't have laughed.

Love that Lapidus is back in the picture. Also loved his realization when he saw the survivors on his plane. "We're not going to Guam, are we?" Seriously though, is Guam really an ideal destination?

Do we think Sayid is on the plane of his own free will, or did Ben get him caught and brought back? I can't imagine he needs to be extradicted back to Guam for anything.

Ok, so let's revisit the Top Losties I Want to Hang Out With:

1. Ben - Seriously because if I'm not, he could show up bloody talking on the pay phone in front of my house. At least I could keep my eye on him.
2. Faraday - He's simply got to know something.
3. Jin - Seems like he's doing pretty well for himself
4. Jack - Even though he's walking around in a fog, obviously stuff is revolving around him.
5. Miles - I know he has a nose bleed and might not be long for this world, but still he's a survivor. I hope.
6. Lapidus - Hopefully he isn't eaten by a monster next week like the pilot from the original crash.
7. Hurley - Though I hate him, of everyone else he is acting like a rational person facing the irrationality of the situation he is in. Nice touch buying up seats on the plane.
8. I fully expect Sayid to be cuffs free on the island. Still...allegedly going against Ben last week can't be good.
9. Locke - Sure, dead now, but awesome ice burn on Jack, and c'mon - he's so not going to be dead soon.
10. Kate - Well, she's still alive. Who knows what she did with Aaron. Guess? Gave him to Claire's mom, because she's really a softie at heart!

Juliet, Sawyer - Yeah, those nose bleeds can't be a good sign.
Jin - Boring.
Desmond - Yeah, not so sure how the family is, so...
Charlotte - well, she's dead and all. And I know that doesn't mean that much on the island, her death scene seemed pretty grave.

It's probably too obvious, but the episode title is a reference to John 3:16, right? Probably the single most famous verse in the Bible: "For God so loved the world, that he gave his only begotten Son, that whosoever believeth in him should not perish, but have everlasting life."

So that's Locke, right? Sacrificed himself for the greater good? And, I'm guessing, he'll be resurrected on the island -- will it take 3 days?

I'm with you. All this religion stuff adds an additional element that I'm not as excited to dive into. It's another level of complication to the mythology that I fear is going to play a big role in their end-game unfortunately.

Didn't love the centerpiece of the first half (Mrs. Partridge explication), but the plane stuff was good. Especially Lapidus' follicular homage to Paulie Walnuts.

RE: Narnia. I'm still bitter about finding out the one non-religious gift from my grandparents (Narnia books) was one big Christ allegory. Fucking bait and switch is what that was. Or maybe a trojan horse. Regardless, this article goes into more detail on the Narnia parallels.

Weird connection that may be old news: I finally saw the second half of Frequency, which deals with weird electro-magnetic phenomenon affecting the normal timeline. Weird coincidence #1: Quaid's wife looked damn familiar, and I finally realized it was Juliet from Lost playing a character named "Julia" as a play a brunette:

I got a similar text from an equally enthusiastic "art fag". Think they know each other?

Art geek is also a bible geek. We just put together some stuff - might turn it into a post. Why not, right?