I'm not talking real stories here either - unless you're totally awesome and banged Bo Derek after the beach scene from 10.

No, I'm talking about the best possible scenario you can think of that you would tell your friends about years and years from now... A story the Native Americans would sing about around a campfire... a time when if death was the next thing after the hook-up, you'd be ok with it.

This idea was spurred on by a question from Sports Guy's mailbag from last week:

Q: I dare you to think of anything better than taking a girl home from the bar on Halloween and watching her put on her costume as she's leaving the next morning. Yeah, can't be done. Hands down the best hookup moment possible.
-- Adam V., Hibbing, Minn. 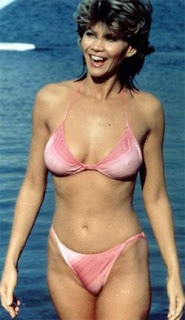 SG: I mean, it's not the BEST hookup moment possible, right?

I immediately started thinking about what I thought would be the best - or at least something better than this scenario (which, admittedly, is awesome).

Here's what I came up with:

Hooking up with your celebrity partner after taping the final episode of you winning it all on 100,000 Pyramid. Think Markie Post at the height of Night Court fame to get a clearer picture.

I'm sure I'll come up with some others, but I beg you to leave your own in the comments and see if you can beat either of the two laid out before you.

Your scenario is utterly fantasic, though missing one thing... I want Graf involved somehow too. With me, with her, it doesn't matter.

Also acceptable is hooking up with Flagg or Dawson after winning Match Game.