A lot of tears this episode, and few of them had to do with cooking.

Finally, we're starting to see some of the chefs' personalities. Whether or not that's a good or bad thing remains to be seen.

Jamie, who didn't make a soup (and there was no reason why she shouldn't, since both Stefan and Carla did and got decent marks) came back down to earth a little, being in the bottom three, though I definitely don't think she should have been sent home. For whatever reason Rocco had a hard on for getting her off though, routinely coming back to her closing down after she didn't finish in time (I also thought she answered well when they brought it up to her. It seemed like they tried to get her to admit she was angry with them, and she explained she was angry with herself for not getting done).

The other two definitely had to go. In fact, I wouldn't have been that upset if they just sent both home. I don't care who you are, if a chef like Colicchio spits out your food, it's bad. Don't try to suggest he couldn't handle the heat (which she did when she said she liked spicy food, insinuating she wanted it that hot. Sorry, Patricia Arquette stunt double, it doesn't work like that.)

But Alex really did have to go. His choice of dish was something that was impossible to create in an hour. It shouldn't have been close. I think he wanted to leave and sabotaged himself, whether he was conscious of it or not. Remember, it was IMPOSSIBLE for him to complete the dish. Why would you go that route?

I think Ariane has some confidence issues, and while it seemed a few chefs thought a salad was taking the easy way out, I don't think Jeff and Fabio thought that way. Fabio even said he thought she deserved to win. Also, I think salad was definitely the way to go and shows she figured out this challenge was more than showing off how to cook - it was showing off how to cook under pressure and how to choose the right dish for the right situation.

The Quick Fire was kind of uninspiring, and they hardly showed any of the chefs' dishes, which felt like a cop out. I realize there is a time constraint, but don't just show me the winners and losers. Show me everything so I can decide. I mean where were Gene, Hosea, Melissa and Radhicka during the Quick Fire?

(You can go to the website here and see all the chef's creations, and even rate them which is cool.)

I do predict that the Hosea/Leah fling going on will have some repercussions later on in teh show's run. They're setting us up for something. 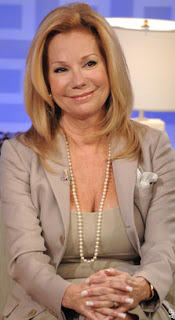 And one more thing - I would have had no problem with Jeff punching Kathy Lee Gifford after that awful performance. I understand there are certain theatric for the television audience one is required to do, but to spit out something that was deemed a great dish by some pretty prominent chefs, well that pretty much proves what an imbecile you are. Simply critique it (by saying you don't like it) and move on. There were plenty of people on that stage that she could have discreetly taken it out of her mouth in a napkin. At least that's what a three year old would have done.

Pretty much agree on all counts. The Patricia Arquette stunt double has the worst hair ever. What's up with those bangs?

It was kind of a cop-out to have the Today hosts judge a winner anyway -- I mean one of them doesn't like watermellon (?!) ... Kathie Lee is spitting stuff out ... they spend about 6 seconds actually deliberating ... it was a farce.

Fabio seems to be becoming the "face" of the season so far. I don't really like him though. I mean its enough already with the Europe vs. American style.

I agree Fabio is the star breaking out. I don't a huge problem with him so far - he seems at least a little humble and accepts fault and blame and hasn't really put anyone down yet. I'll emphasize yet, because it certainly seems in his personality to do it.

I think Gene and Hosea are dark horses - maybe not to win, but to keep advancing.