And we all thought it was a brief moment of humor in The Dark Knight, seeing people dressed as Batman, fighting crime. A clever scene from a movie showing idol worship gone wrong.

Apparently it's a whole lot realer than we thought.

This article goes into a little detail. This one from Rolling Stone goes into it a little more.

What am I talking about?

You didn't think we could pass this up, did you?

On the flip side - a look at the more "interesting" ones...

It's not often something on the internet surprises me. I have a decent amount of experience with the wide range of unusual themes/concepts people come up with and then publish out there for the world to see. I even lump myself into that category due to this blog, and would never hold myself above the weirdness that swirls around the cable and DSL modems for people to peruse.

That said, I got taken by surprise by real superheroes. And I shouldn't have, because it's not that crazy enough not to exist. And there's plenty of weirder things to find out there. I guess it caught me because of the size of what's going on out there, in different cities. I mean, there's a directory that you can go and look at (which kind of defeats the purpose of secret identities really, and speaks more to the idea that these people want some level of fame, but that's a discussion for therapists and sociologists, and not me). 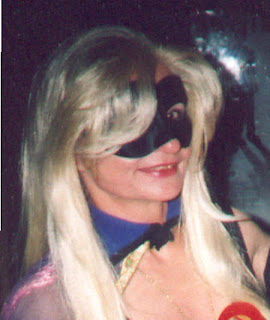 I get that people want to go out there and stop crime. I get that many people think they can help the police in certain situations and patrol areas. I don't get the need for dressing up and taking on a superhero's persona. I can honestly say I'm not sure what to do here. On one hand, I want to make fun of them like crazy. On the other hand, I mean, this is just too weird. I think many of them should get at the very minimum, some counseling. Seriously. I can appreciate that many of them know not to intervene during an actual crime, but still. This person, the Queen of Hearts, patrols Jackson, Michigan (which apparently has not one, not two, but three actual "superheroes" patrolling the streets, which leads me to believe that Jackson, Michigan either has A LOT of crime, or there really isn't much to do there. I don't plan on visiting to find out).

It also looks as though Doctor DiscorD went to the trouble of trademarking his name, unless he believes that simply putting a "TM" next to his name is cool/considered a legally binding agreement with the reader. The jury's still out on that, and it's not worth an email to ask really.

What I think I've decided to do is perhaps attempt to get an interview with one of these people and see if they will answer some questions about the nature of their actions, and what they want to get across other than the obvious "fighting crime" answer. I'm not sure I'll be 100% successful, as I'm sure the popularity of that site (which has hit recently around the net) will have others clamoring for the same information.