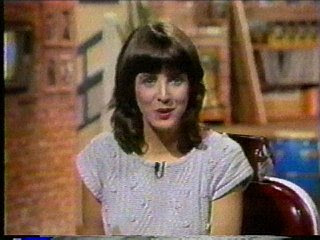 I'll forever have fond memories of AL TV (event television), Remote Control (I'll go to my grave convinced that Ober was somehow banging the delectable Kari Wuhrer), and the Friday Night Video Fights (hey, someone had to help Duran Duran's "The Reflex" set a record by winning 13 weeks in a row by calling a 1-800 #).

How about just the one to tide you over?

I really wanted to avoid some of the videos that are immediately, knee-jerkedly associated with MTV in the 80s. Sledgehammer, Thriller, Kokomo, etc., Those have earned their place in the pantheon. Nor did I want to go super obscure, like say "Dog Police" (I dare you to watch this and not have this chorus stuck in your head the rest of the day):

So here are 3 of the 80siest videos that I loved as a kid, straight from the sweet spot midway between obvious & obscure. And each represents a stylistic archetype used extensively by other bands.

"Hey Pretentious Director Guy, Why is the Blue Fruit Wearing a Green Barrel Featured So Prominently in Our Video? High Quality Coke Became Really Easy to Smuggle Into the US in the 1980s? Right-o."

These videos required minimal effort from the band and maximum pretension and shroom intake from the director.

I like this song, but the video is dystopian nightmare. I think the gist is that the red footless guy sitting on the ledge is watching New Order on his head screen and can somehow control the action in the arena. In the beginning he tilts the screen and the 3 striped dudes fall down the stairs from the street. After running backwards. Yep, it all makes sense now. Wait... Nope, no it doesn't. It never does.

Actually, the biggest surprise from this video is that, to my knowledge, New Order has never taken legal action against Cirque Du Soleil. I'm pretty sure that without this profoundly absurd video, I never would have paid $75 for 90 minutes of wonderful whimsy, whimsical wonder, and 9-year old Chinese girls juggling mustachioed French acrobats with their feet. Thanks a lot, New Order.

Other items to note:

"We Gotta Have a Plot. We're a Serious Band and We Should Be Serious About Something. Seriously."

Like running backs from USC, linebackers from Penn State, and motile sperm from Travis Henry's vas deferens, few organizations have been as productive as Genesis when it comes to successful solo careers. Everyone knows about Phil Collins, and most music fans know that Peter Gabriel was a founding member of the band. Not remembered as fondly or as often are Mike + The Mechanics. They were founding Genesis bassist Mike Rutherford's solo project. This was his ticket out of listening to Collins talk endlessly about how big "Buster" was in Australia.

The odds of the drummer hitting it big are high, but the bassist? Vegas has permanently taken that one off the boards.

While they didn't have prolonged success, Mike + The Mechanics had several Top 10 hits, including a #1 with "The Living Years" (an infinitesimally edgier version of Foreigner's "I Wanna Know What Love Is").

I remember watching "Silent Running (On Dangerous Ground)" as a youth and really wanting to find out what happens after the boy is beamed up to be with his dad. The video plays like a setup for a syndicated show with low production values but lots of heart. At the absolute minimum, I expected future Mechanics videos to continue the plotline.

I did some digging and the background on the storyline confusing. The video features a few clips from a movie called (in the UK) "On Dangerous Ground" ("Choke Canyon" in the US), but the video's central plot has absolutley nothing to do with the movie. With me? Good.

Other items of note:


The Band As Guardian Angels

As Goose mentioned in his list, many a 70s rock band decided they better reinvent themselves for the MTV era or start learning carny speak. I don't think any band did a better job of that than ZZ Top. They certainly had a unique "look", but their music wasn't MTV-ready. Beyond updating their sound, they needed a hook for the videos. A saucy take on the Cinderella legend spruced up with hot rods, hot chicks, and cool special effects did the trick.

These kind of videos represented the ego trips for the band. They can bend the rules of time & space with the power of their rock, and they use those powers to liberate the overworked and underappreciated proletariat. For more examples, please refer to Sister, Twisted. Oh, and Oswalt, Patton.

Other items of note:
Posted by Cline at Thursday, November 06, 2008

I'm like 70% sure the guy who gave the kid a key in the Mike and the Mechanics video was the same dude who played Frank Nitty in The Untouchables. Which makes this video exponentially creepier. And awesomer if that's possible.

Good catch. Though I'm sad to think that Ronnie Wood is no longer associated with this video except in my own mind.

you know, looking at his career choices, either he's really typecast, or he LOVES the horror movies.

Funny, I love all three of those songs but had never seen any of the videos. As a child who was not allowed to go trick or treating, do you think we had MTV in our house? eh, no. BTW, Cline, please do not add this to your fictional list of Things You Plan To Antagonize My Parents About Over Salad.

Cline, invite me to dinner with you an kchop's parents and I'll breakdown that list before the second sorbet is served. You know, the clean my palette after the soup.

No trick or treating? Are you mormon?

Ask Goose to tell you the story about how we saw Ken Ober in Salt Lake City. Gee, that would be a ripping good yarn for a podcast. You know, If you guys had a podcast ...

yeah, my mom went through a very unfortunately-timed phase. My older sisters were allowed to go, and i was finally allowed to go when i was 12ish(?). Lovely woman, really, and that and other things make for funny stories now (although not to her), but man did i catch some heat for it growing up. Kids can be CRUEL! Although, I think the bulk of them work at gas stations and simliar now, so it's a wash...

I don't know what you have against gas station attendants.

SLC podcast? I'll call in for that and I'll ask Kelly (Law) if she'd be willing to join.

Your Kelly Law obsession will be your downfall. The Norwegian curling team blew everyone out of the water. Well, that and Petey scaring the bejesus out of that female Japanese curler.

I suppose one and all should browse on it.