Top Chef Season 5 - They cut the hot one! 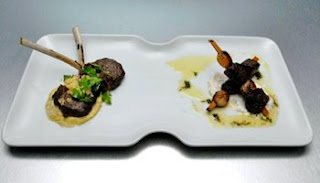 To me, Top Chef is one of the better competitive reality shows out there. I enjoy food, cooking, and seeing these idiots competing against one another in high pressure situations. And everyone has to eat, so we all can have a kneejerk reaction to something even if we can't eat it. I think Tom Colicchio is a good, no nonsense judge who doesn't take shit from the contestants, and it's cool to see what celebrity judges will stop by.
That said, I think this season is a little bit of a copout, returning to New York. I mean really, there's no reason it can't be held anywhere really in the country. The contestants are from all over; the judges are from all over, so why go to New York again? It all feels like a bit of a cliche.
I guess it doesn't matter though, as the show is pretty deep into filming I'm sure. Anyway, just wanted to get that out there. On the flip side, a quick look at last night's episode.


We meet the contestants (kind of) on a ferry. It's always fun at this point to try to guess based on editing and camera time who's going to go home first. At first I thought it was the tall skinny woman, who follows her spiritual voices. It wasn't though; but she can't be long for the Top Chef world.

I also thought the Long Island chef had a chance to go, Danny, based completely on the weird anti-goatee facial hair thing he had going on. Is that a look that I've (happily) missed out on?

First Quickfire challenge also had some serious meat behind it - lose it and go home. Yikes. We haven't had five minutes of camera time and we're sending a chef home. They can't be happy with this news. And a side note - would it kill the producers to put Padma in tighter clothes? Just wondering.

And it looks like success has gone to Colicchio's gut. More power to him.

Do stuff with apples!

Actually, that's selling the challenge short, because they had to peel the skin sans peeler. Not sure how many of you have tried this, but it's not easy. I usually get maybe three pieces and the core out of it whenever I try it. Anyway, it seems like no one really has trouble with it, even the people that don't advance to the safety round. Everyone that asked for the check, Colicchio passed through. First nine made it through, with the fastest (Stefan) getting immunity for the first elimination. (Stefan looks like he's going to be a contender in this one, bringing great cooking skills and European attitude.)

The remaining eight now had to dice the apples. Apparently it was tougher than that, since the chefs were told it had to be a specific cut (I forget what Colicchio asked for) and many of the safe chefs immediately sympathized. Anyway top 4 here are safe, leaving 4 to battle it out to stave off elimination. Each had to basically prepare a dish with their diced apples. Worst dish gets back on the ferry.

It's here where I question some decisions made by the contestants - namely Lauren, for deciding that a salad is going to not only show off her cooking skills, but impress anyone. Yes, you're attractive and your letting your curves do most of your talking here. Unfortunately it isn't Top Model. Throwing some bleu cheese and a balsamic vinaigrette out there isn't doing you any favors. Especially when it seemed like there were some decent ingredients out there. Two of the other chefs used pork and scallops. You used spinach leaves? Sorry Lauren - you deserved to go.

That done, we now get to see the awesome loft in Brooklyn where the chefs will be living, and get to do some foreigner bashing (though they probably deserved it) and to build drama for later in the season. Whatever. We also hear what the elimination challenge will be: chefs are paired with a specific ethnic borough in New York and must compete against one another in coming up with a dish that best represents it. A good solid challenge to show off cooking skills and creativity I thought.

I'm not going to go into detail about every dish, I'll just throw a couple quick, random thoughts...

In the end, I think the right guy left. No idea why Patrick would choose an ingredient he never worked with before in an elimination challenge. Decisions like that (obviously) get you sent home. But I think he'll learn from something like that, and be a decent chef in the future.

The judges on Top Chef, to me, do a better job than any other reality show of sending home the right people at the right time. I mean, we can't taste the food, but it always seems like they make the best decision for the circumstance. 21-year old kid who isn't even out of culinary school? Yeah, see ya'. And whawt does it say about that school when Lauren goes home the same night? Apparently they met there. Yikes, wouldn't want to be the dean of that institution this morning.

I guess you might be the only on who will miss Gail -- I heard she won't be on at all the second half of this season because she's getting married. She doesn't bring much to the table for me.

They've already painted the European duo as the enemies, which I found a little cliche. Otherwise, good start.

I thought they all looked like they could cook - or at least a bigger percentage of them than in past years.

I agree Gail doesn't seem to bring much to the table on air, (other than her bosom) but she must weigh heavily in the judging or they wouldn't keep bringing her back.


I also thought both eliminees were from the CIA. From everything I've heard I thought that was the place to be in the US. Not saying i'm right. His chinese was uninspired. Not saying it's easy to cook Chinese - but you can throw something together better than he did.