So now we have a game that about 14 people can see because the NFL Network is carried only on Cousin Larry's House of Cable Channels. Sure, there might be some Pacific Northwest public access television host sketching the action on a blackboard for his audience, but other than that, we have to squat around a radio ala FDR's Fireside Chats and "imagine" the action. Sorry, if I wanted awful, old time football memories, I'd rent Leathernecks.

Not to mention it means I've now got to get the pick up a full day early. Hey, thanks NFL! Let's not worry about the rampant crime and steroid scandals that you continue to sweep under that ready-to-burst rug, let's make sure you get a game on Thursday night!

Well, at least you made the matchup for the night a classic one - Denver @ Cleveland. Shouldn't it just be simulcast on ESPN Classic?

I will give the NFL network one bit of credit. It seems Mr. Gumbel will no longer be doing games. So no more pseudo-intellect play-by-play, no more stumbling through sponsors, and no more blatant name fuckups.

Actually, I'm going to miss him!

As always picks are CAPITALIZED, and bold: 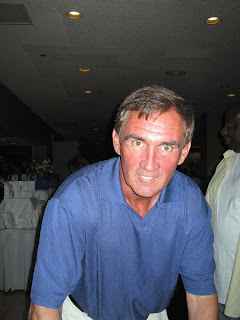 The Brady Quinn era begins...tonight! No idea why I continue to think Denver is a decent team, other than they probably have the most handsome coach in the NFL, now that Nolan was fired. What that counts for, I don't know, but I'm going with the road dog here - the AFC west is still wide open, Brady Quinn is not touchdown Jesus no matter what you've heard, and since no one is going to see this game, it probably doesn't matter who wins - I'll just mark it as a win no matter what.

Stay tuned for the rest of the pics tomorrow, when I actually have time to put some effort in.

Ok, I'm back, and a little less angry after receiving a telegram last night that Denver had beaten the Browns. I can't wait to read about it in the "newspaper." I feel even better that Cline took the other side. Now, I'm not going to say exactly why I think he may have gone with the Brady Quinns last night, but I do know this is his screensaver. Jump to your own conclusions. I have a neat mat you can use.

I don't think the Titans will go undefeated this year. But I also don't think a team led by Rex Grossman is going to stop the streak. Even if it's in Chicago.

I actually just changed my mind on this game, and deleted a huge rationale about how Jacksonville stinks, since they not only didn't cover last week, they actually lost to Cincinnati. But then I figured there's no way they lose 2 weeks in a row to 0-8 teams. And then I figured there's no way they're going to let Detroit stay close to them, right? I don't have the time, inclination, ambition or desire to look up the last time a team lost to two winless teams in a row so late in the season, but it has to be rareified air, right? Now I'm torn. I kind of want Jacksonville to lose. But not enough to not take them here. There's simply no way Jack Del Rio allows this game to be close, right? Right?

8.5 points? Really? That seems insanely high. Which is exactly why I'm taking them. The Seahawks have to be annoyed with all these games on the east coast they have to keep traveling for. It can't feel good in week 10 to do all this flying. Pretty much the only way I see the Seahawks having any success is if the Redskins fire Zorn in the next 20 minutes, causing him to go into a insane rage and quickly sign with the Seahawks and lead them to a victory (or close cover) over the Dolphins to show Dan Snyder what a mistake he made.

Hey he's a lefty, so I wouldn't totally rule it out.

I guess it's possible Houston could still surprise everyone and get into the playoffs like ESPN predicted, but really, it would take a pretty big effort. Meanwhile, is there a quieter 5-3 team than Baltimore. I seriously thought they were 2-6 until I looked up their record. Harbaugh is putting together a nice little run.

I can't say I care even a little about this game. But for all of you out there who are Rams/Jets fans, you can feel good knowing Siragusa will be part of the announcing crew for this one.

I think the Falcons are playing with a bunch of confidence. Too bad ESPN didn't pick them as their sleeper. Now, this is exactly the type of game that a young team could lose. Going up against an underachieving but still dangerous team at home, coming off a big blowout. All signs point to taking the Saints. But I'm going to go rogue on this one and take the Falcons. No real reason other than games like this happen.

Belichick should come out in a top hat and cape and twirl a mustache he's so hated in this league. I mean as long as it was an NFL sponsored top hat and cape. I'm still going with the man here since Buffalo lost last week and gave Evil Bill plenty of game tape to watch instead of sleep. Plus, points at home? I'll take them.

No idea alert! No idea alert! Oakland is painfully bad. Carolina is pretty good. I know it's on the road, but shouldn't this line be Carolina -47? Ok, that's exaggerated but you get my point. That it's only a touchdown is a little weird, but I'm still taking them.

I have a strange feeling Indy played their superbowl last week. An awful, boring superbowl, but still...I feel a letdown. And I don't feel a letdown from the Steelers. In fact, they kind of feel letdown proof.

Denver winning forces San Diego to take this game a little more seriously. They can't lose or they fall further behind in what I like to call a "horrible" division. Yikes. I'd hate to be a fan of the AFC west right now.

I also heard LT is a second half "dynamo" and something like that has gotta be true. I'll take the Chargers to win this one easily.

Can I beg off this one? Being an Eagles fan prevents me from looking at this one logically. Oh fuck it, take the Birds. Eli has never really done well against a Jim Johnson defense.

I thought Mike Singletary was ready to turn the 49ers around, even during this season. Then he took off his pants. I'm taking the Former Iowa Barnstormer in this one.

I did this in the comments of another post, but I'm taking CLEVELAND (-1).

I started a respectably-long NFL picks post, but the laptop I'm borrowing is about to die. Here are my picks in case I can't get home before the first game starts.

I'm not sure why I'm bothering because Goose is enough of a gentleman gambler to allow me to take a .500 record if I didn't get my picks in by 1. He's a stand-up guy.

wait - who is this? I mean I know a Cline, but anyone can write a name into a comment section of a blog.

Berman's already used The Mighty Quinn (for Jags backup QB Jonathan) and (presumably) Brady Bunch for Tom and/or Kyle Brady. Is it possible that he goes for Brady Quinncy, MD and our favorite YouTube clip of all time gets some national publicity?

If you read Mushnick's column with any regularity, you'll know that he hates everything, but reserves his most consistent hatred for Mike Francesa and pro wrestling.

I linked to Mushnick for the item about the NFL cameramen being treated like shit by the Patriots' coaching staff.